Due to COVID-19 current NSW government restrictions our stores trading hours have temporarily changed. We will be open from 10am to 3pm,
7 days a week for all your emergency lighting needs, with extra safety precautions to help you shop with us safely, during this time.

Please check out our Contact Page if you need to get in contact with us. Stay safe.
Due to COVID-19 current NSW government restrictions our stores trading hours have temporarily changed. We will be open from 10am to 3pm,
7 days a week for all your emergency lighting needs, with extra safety precautions to help you shop with us safely, during this time.

Please check out our Contact Page if you need to get in contact with us. Stay safe.

Why LED Downlights Are the Right Choice for Your Home

LED technology has come a long way over the past few decades. LEDs are now cheaper, more efficient and more versatile than ever before. While they can save consumers money on their electricity bill, they’re also brighter and more customizable than traditional fluorescent or incandescent lights.

The efficiency of lights is measured in lumens per watt, or how much brightness a light can put out on one watt of power. Traditional light bulbs (incandescent bulbs) put out about 15 lumens per what, while energy saving fluorescent bulbs can output a bit less than 60. LED bulbs can manage over 75 lumens per watt, making them more than five times as efficient as traditional bulbs. If you want to save money while keeping your home bright, LED downlights are the way to go.

Most LED bulbs are dimmable down to 1%. This gives you perfect

control over the brightness levels in your home at all times. Downlights are available in a variety of colour temperatures, so you can choose between a brighter, harsher white or one that’s a bit more soothing on the eyes. With numerous form factors to choose from, you’ll be able to choose downlights that compliment your home perfectly. 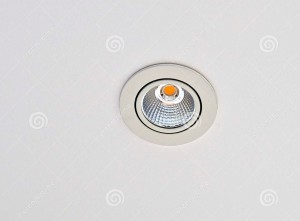 LEDs aren’t just more efficient than traditional bulbs. They’re much brighter, too. This increased brightness allows you to use a much smaller number of LED fixtures to illuminate a given area. More illumination means better vision, too. Having LED downlights in your kitchen will help you notice all of the little details as you prepare food without using any additional sources of light.

LED stands for “light emitting diode.” A diode is an object made by connecting a positively charged semiconductor to a negatively charged semiconductor and attaching an electron to either end. When electricity flows through the diode, sometimes electrons will change state in a way that produces light. The diodes in LEDs are made of materials that maximize this interaction, meaning that they’ll produce a lot of visible light very efficiently. They’re also constructed to make sure that the light goes outwards (where you want it to) and not right back into the device. While LEDs have been around since 1962, they’ve only gotten cheap enough for use in home lighting recently.

One of the best parts about LEDs is their reliability. While fluorescent and incandescent bulbs produce a lot of heat and wear down over time, LEDs don’t. In fact, they have a lifespan of about 50,000 hours. This is just under 14 years at 10 hours a day. You won’t have to replace your LED downlights for a very long time. Best of all, since they don’t produce much heat, you don’t have to worry about them causing damage to anything else in your home.

With many LED downlights, you aren’t limited to customizing the temperature or brightness of the light. Some models come with reflectors and face plates that allow you to carefully shape the spread of light and illuminate exactly what you want. You can use this to highlight your interior design, focus light on a work surface, or simply have a nightlight that always keeps parts of your home illuminated.

LED downlights are favoured by consumers because of their long life and efficient use of power. Not only will they reduce the amount of electricity that your home consumes, but you’ll also save money by not having to replace bulbs for decades at a time. With a variety of form factors, brightness levels, and colour temperatures to choose from, it’s easy to pick out a light that’s perfectly suited for your home. Finally, LED downlights allow you to shape the light that leaves the feature, enabling you to choose which areas of your home get illuminated. Even if you’re not interested in any of these features, they’re brighter than most of their traditional counterparts, making them a great choice for any household.
You’ll be amazed at the range and quality of options in LED downlights perfect when you are building a new house. Given their features and lifespan, they’re quite affordable, too. Remember that an LED will last about 25 times as long as an incandescent bulb.
We, at Eurolight, will give you all of the information you need on LED downlights and any other tips or tricks you might want for when it comes to making your home light up perfectly.